Well done to our partners Bilstein who again took the top step at the recent Nürburgring 24hour race with the Black Falcon Racing Mercedes-Benz AMG GT3. It is only a matter of weeks since we brought you news here of Bilstein and Black Falcon Racing’s continued cooperation taking the partnership through over a decade of racing success. Read on as this was no ordinary race however and anybody following the action last weekend was given a real treat. This was the 44th  ADAC Zürich 24h Race on the famous and challenging German Nürburgring, with everything that this famous event has always been known for dished up to the racers and spectators on the day. After a thoroughly exciting race with more than 30 changes of leader the number 4 Mercedes AMG GT3 fielded by BILSTEIN partner Black Falcon finally took the win. This was only after a spectacular overtake on the last lap of a nail biting race which at one point had to be red-flagged during a massive hail storm. 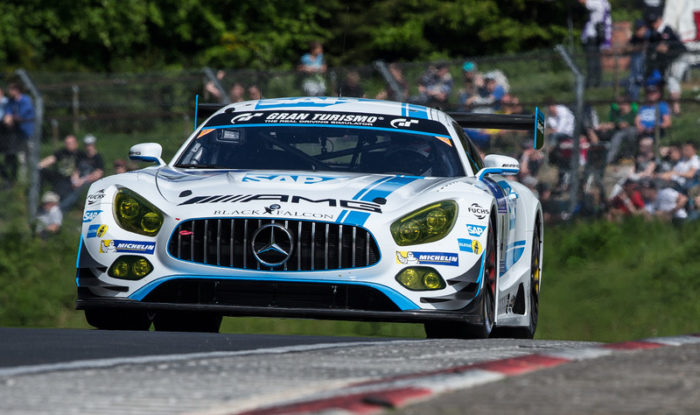 Drivers Bernd Schneider, Maro Engel, Adam Christodoulou and Manuel Metzger took a well deserved win in the end with a margin of only 5.697 seconds after 24 hours of hard racing. The spectacular looking BILSTEIN liveried car we showed you in our Spring round up and carrying the number 9, stomped home in fourth. Both of these ultimate GT3 class cars featured BILSTEIN’s new, four-way-adjustable “Modular Damper System” further proving the credentials of this race bred suspensions which not only survive 24 hours racing on “Green Hell” but dominate their competition. “We are very pleased with this great success and our partner’s showing in this memorable race. That our modular shock absorber system has once again worked perfectly on one of the most exacting race tracks ever is not only attested to by this victory, but also by the fact that the team occupied the pole position and drove the fastest lap of the whole race,” BILSTEIN’s motorsport director Martin Flick commented on the podium

Aside from the Mercedes AMG entries this week at the Nürburgring, the Bentley Continental GT3 equipped with Bilstein suspension consistently performed through the 24 hours to nail down a solid 7th position. An other famous UK racing marque Aston Martin who are also partners of Bilstein with their factory race cars campaigned two Vantage V12’s in the GT3 class but as with the normally all conquering Audi R8 LMS, the freak hail storm took all of these strong racers out of the competition. All in all, more than 40 BILSTEIN-equipped cars took part in this 24h marathon. Aside from the six factory cars in the top GT3 class, there were also plenty in lower categories, where BILSTEIN customers were also successful. Black Falcon won the SP7 with a Porsche 991 GT3 Cup and the V6 with a Porsche 991. In the SP3T class, the Subaru WRX STI fielded by Subaru Tecnica International was a class winner. In the V3, the winner was a Bilstein equipped TMG GT86 driven by the Belgian Pit Lane AMC Sankt Vith team. This Toyota, and the Opel Astra OPC in Cup1, is equipped with simultaneously traction/compression-adjustable BILSTEIN mono-tube gas-pressure shock absorbers with upside-down technology, clearly the class of the field.

Not satisfied with all of these class wins, Bilstein also scored another 24h win in the Nürburgring fringe programme. The ADAC 24h Classic, a trophy race for classic cars, was won by Michael Schrey, whose Porsche 935 K1 also featured Bilstein components. Search for your Bilstein Upgrade

Spring News Round Up

Speaking of spring, let's get things moving with talk of springs, or suspension to be more specific. Our partners Bilstein produce literally millions of ...